Romans come to the Junior School 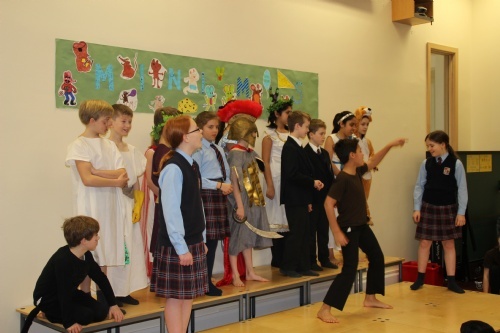 The Junior School went back in time this week, with a trip to the Roman period.

The children then set themselves a task of performing a short Latin play, which looked at what life was like for animals, slaves and Roman citizens in the bleak outpost of the Roman Empire in Britain.

The show is set in Vindolanda, near Hadrian's Wall. There are birthdays to celebrate, spilt milk to mop up, dancing mice and bored school children.

Sian Foster, Teacher of Classics, said: "The performance was professional but spontaneous, and included audience participation! All enjoyed it and entered into the spirit of the play with a gusto!

"The children have learned about the Romans in Britain and have enriched their language through an understanding of the Latin derivations."