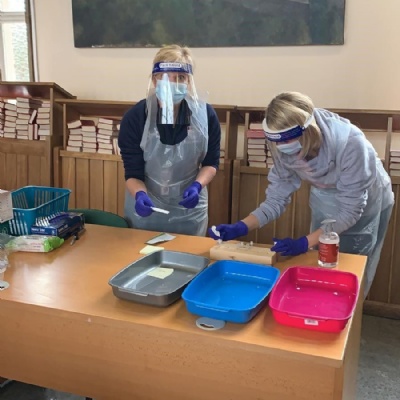 I have not blogged for quite some time and it will come as no surprise to you at all that the theme of this long overdue blog is COVID19 and Solihull School.

At the end of last term we received the news that schools would resume in January, with a staggered start and that we must set up on-site C19 testing facilities.  Announcing this at the beginning of the Christmas holiday was not terribly well received, but we got on with communicating the news to all and redeploying the Chapel as a lateral flow testing centre.  Calls went out to volunteers, risk assessments were modified and created, the building was reconfigured, logistics were tested, refined and confirmed, and we waited with bated breath for the delivery of training materials and test kits, which were promised on 4 January 2021.

I truly believe that we have a very strong can-do attitude here at Solihull, but staff were exhausted after a lengthy term of C19 restrictions and adjustments, and to be asked to set up a test centre for a community of nearly 2,000 people with little to no notice was verging on comedic, particularly as this is so far removed from our day jobs!  There was talk of military assistance, but we have seen nothing of this yet.

Given that the Chapel was being used as a temporary, socially distanced staff workspace and that we were hoping to return it to its intended use very soon, I was bitterly disappointed to lose it again, this time for testing and all that is required of such a facility.  However, rest assured that upholding our Christian values is not reliant on bricks and mortar.

Moreover, we were (and still are) caught in the escalating crossfire between teaching unions and the Department for Education, and to compound matters further, the edict from the Government on testing came with no funding for independent schools and little more than an idiot’s guide to building and running your own test centre!  Thankfully, our health and welfare team got stuck into a plethora of webinars and other self-help resources, and front-footedness won the day.

I am very proud of what we have achieved and despite the U-turn on a staggered start, which I will come to in a moment, the test centre is amazing.  The response to our request for volunteers was overwhelming and we are now fully operational, with tests being administered daily to staff and pupils alike.   Swab tests are not meant to be fun, but the care and professionalism shown by all those involved makes for a calm and reassuring experience for most, if not all.

Whilst testing is not mandatory, I would urge everyone, especially those accessing on-site provision, to consent to the process, as it does give us all peace of mind that those in school, as well as those at home, are infection free.

Rolling forward to the start of this term, we were ready to go, as outlined above, and then the Prime Minister made a new statement, this time not at the end of term but at the beginning, stating that we would not return to school and lockdown restrictions were to be reinstated.  Gosh, things were changing quickly…

Thanks to colleagues and our volunteers we made the necessary adjustments in time for the start of our term two days later, but we continue to feel like pawns on a chess board in a contest between scientists and medics on one side, and politicians on the other, with unions jeering from the side lines and waiting to take on the winners.

So, here we are in January and school is open for three distinct groups: nursery pupils and children of ‘critical workers’ and those deemed to be ‘vulnerable’.  I use quotation marks deliberately to identify both terms as those chosen by Government.  The word vulnerable is particularly emotive and I wouldn’t ordinarily use it so liberally.

We now know that GCSEs and A Levels will not take place as planned, but without really knowing what the alternative is.  We know that teacher judgement will be at the heart of the process – which is both commendable and challenging – but we don’t yet know of the type of moderation which will be used to replace the ill-fated algorithm of last summer.  To compound matters further, we await confirmation on whether IGCSEs will run or whether they will fall in line with GCSEs.

All of this has hugely important implications for Upper Fifth and Upper Sixth mock examinations as either a source of evidence for teacher recommended grades or as important preparation for IGCSE examinations.  This is very stressful for pupils in these two year groups and all I can offer is reassurance that we will make sure they are fully prepared for all eventualities, including a hybrid model of GCSE Centre Assessment Grades (CAGs) and IGCSE exams.

So, what can we take from all of this?  Firstly, I very strongly recommend that all pupils, parents, staff and governors acknowledge the great resilience you have all shown.  In addition, the care, creativity, commitment and technological upskilling displayed have been nothing less than remarkable, and if we ever needed a real-life example of a growth mindset, then look no further than our own school.