The Daleks Are Coming! 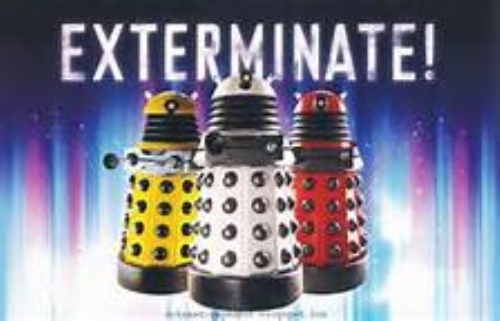 Are you familiar with the household scene which involves a frustrated and often irate parent trying to catch the attention of an offspring meandering aimlessly around the house, totally oblivious to the rising volume and pitch of mum or dad’s calls? Son or daughter may be wearing a “onesie”, probably has bin-lid size headphones on with cables dangling from each ear whilst both hands type furiously on a mobile phone. Thumb speed is reminiscent of Usain Bolt and the occasional private joke may cause a momentary burst of emotion before the subject returns to a zombie-like state. The dalek child will be paying no attention whatsoever to where he or she is going but has a natural homing device that somehow leads them to the refrigerator, food cupboard or sofa. Once contact has been established, the subject is likely to view mum or dad’s frustration as laughable or at least totally unreasonable. Sound familiar?

Anyway, it’s approximately 21 years since the first text, which was sent on December 3 1992 by a British engineer and simply said “Merry Christmas”. In 2013 texting is most prolific in 12-15 year olds, each sending an average of 200 texts per week. Whilst texts now outnumber telephone calls they have recently fallen in volume due to the increased ownership of tablets and smart phones and greater use of instant messaging and social networking sites.
I do challenge pupils who walk around the site whilst texting (and not looking where they are going) and sometimes ask the question, “Can you imagine a world without mobile phones?” Once they have recovered from the shock of my impertinence& absurdity, the universal response is a somewhat confused “no” and a look that ranges from pity for the old bloke who knows no better to a glare that would frighten even the most fervent luddite.
As educators should we be worried by this phenomenon? Opponents argue that texting and use of acronyms such as lol affect the ability to communicate and are detrimental to language development. Constant abbreviation may weaken the ability to form coherent sentences in real life. When we talk to each other in person our conversation is made up of many non-verbal cues and these cues are vitally important to dialogue and can have more impact on the conversation than the words themselves. Effective communication has depth, nuances, ebb and flow, emotion and tone and our cues often include facial expressions, posture, eye-contact and gestures. The danger with texting is a risky lack of context and the increased likelihood of clipped grammar-less messages lacking substance and complex language. In addition, a common assertion is that texters are not developing appropriate social skills.  A rebuttal to this would be that texting is rapidly becoming an integral part of the flow of information in society and that it is, in fact, in itself a social skill.
In my opinion, the key is flexibility; young people should be taught to adapt to each situation as appropriate. Pupils do not write in text language and know when to be formal in communication. Furthermore, spelling, punctuation and grammar remain as important cross curricular themes in education and feature heavily in new GCSE grading plans. Texting can actually encourage young people to be concise and clear, saying what they mean efficiently and precisely. It is vital that we understand and embrace the world the pupil lives in and how they communicate. We frequently discuss how we can do the best job of communicating with young people, yet at the same time many continue to dismiss the use of texting, a communication technique that is a part of most pupils’ daily lives. Texting messaging is useful for academic engagement. Pupils like the versatility that mobile phones provide, enabling them to access course materials and communicate with peers and teachers while on the bus, waiting to be picked up or during other personal time. Since interactivity in and out of the classroom can enhance teaching and learning, then surely the idea of embracing the mobile phone and text messaging is an idea worth investigating further.