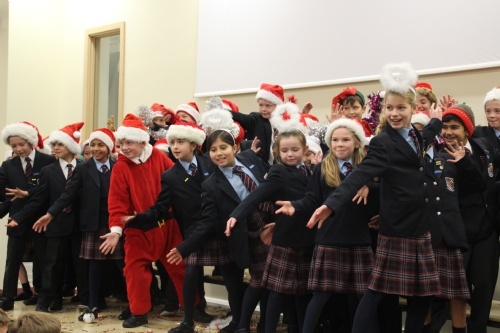 The winter months at Solihull have proven to be extremely busy for all aspects of school life. Even with shorter days and darker nights there still seems to be endless activity on, and in, the sports pitches, drama studios and debating chambers.

One key feature of November at Solihull was Remembrance Day on the 11th November, which saw two significant moments for the school. The annual service and parade was a success and a memorable moment of silence for those who fell in the World Wars. But in addition to this we had the incredible opportunity to plant a tree, seen from the window of Anne Frank’s house, that was such a huge feature in her diaries. The tree came from the Anne Frank Tree Foundation Trust, which travelled all the way from Amsterdam, brought over by two specialists, and it is now planted outside old school house. The tree planting itself is a hugely momentous moment for our school history and for the history of the Holocaust, but what was even more noteworthy was that it was planted by a Holocaust survivor, Mindu Hornick. With four Sixth Form pupils involved, Victoria Newbery, Arjan Bains, Leticia Salmon and Holly Krober who organised the event, the ceremony was a moment of history, which was marked as the soil was placed onto of the roots by Mindu. Charlotte Sasse a lower sixth pupil played the theme tune to Schindler’s List which was a touching addition to the planting. Alongside Mindu there were other representatives of the Jewish community, Christian community and the school community that all came together to recognise such a significant occasion. Perhaps what makes it even more significant is that this tree is one of only 50 across the world, and Solihull is the second to receive a sapling in the whole of the UK. So noteworthy was the occasion that it even made the 6 o’clock news later that day!

Following on from a memorable day, a couple of weeks later we saw the opening of the Cooper Building by a former well known pupil Michael Buerk. It was a fantastic day where Old Sihillians were also invited to mark the occasion. The brand new four storey Sixth Form building – definitely a step up from the old centre, is a remarkable achievement for the architectures involved. Michael Buerk reflected on his time here at Solihull and the memories of old traditions, even mentioning once or twice his time in ‘I’m a Celebrity Get Me Out Of Here’.

Alongside the opening of the building, was the burying of the Time Capsule. This seemed to be another notable moment for Solihull as memories of 2015 were encased in a solid steel capsule and buried outside the Sixth Form centre to be opened on the school’s 500th anniversary in 2060. The comparison of life now and then will be extremely interesting, looking at simple things such as technology, fashion, school materials and even social norms; all things that are expected to change drastically in the coming years. If that wasn’t enough, the same occasion saw the revealing of our second Sculpture, ‘Leap’, made by Matthew Lane Sanderson. Placed just outside the Cooper Building, it is a symbolic reminder of how anything is possible, leaping into the future of life beyond Solihull.

The four of us all pondered our lives beyond Solihull, especially at the opening of the Time Capsule 50 years later… where we would be in our lives – how frightening! Especially with the increasing numbers of terrorist attacks, civil wars and environmental disasters.

The Big Debate followed on from the opening of the Cooper Building and was a pleasant reflection of the change in society and the growth of diplomatic issues. Michael Buerk, as our Debating President, chaired the debate entitled, ‘This House Regrets the Government’s Pushing of British Values’. Proposing the motion was George Diwakar (an ex pupil) with Megan Lloyd (a current pupil) and opposing was Katy Hatter (OS and now the youngest university president of a debating society) with Zershaaneh Qureshi (a current pupil). The whole debate was filled with excellent points, and tough rebuttal where the issue of the government’s scheme of ‘British Values’ was unpicked in detail. Michael Buerk was particularly impressed with the involvement on the floor and the complexity of arguments.

Moving towards Christmas we saw a number of achievements throughout sport, including the school Ski Team competing in the British Schools’ Open Championship held in Pontypool. Helena Newbolt once again proved to be the fastest girl skier on dry slopes in Britain for the third time. Furthermore the girls’ senior 1st  VII netball squad and the 1st XI Girls’ hockey team became county champions.

We saw the Lower and Middle school come together for a production of  ‘His Dark Materials’, a play based on the trilogy of fantasy books by Philip Pullman. The play was a huge success and performed over 3 nights seeing a star in the making – Megan Davies who took the lead part. Huge congratulations must go to Megan for her stunning performance, particularly as she was on stage throughout the whole production. Moreover, the work put in by all other pupils and most notably the Art department who created fantastical costumes and set designs must be congratulated; it brought the whole play into a world of fantasy. It was a great moment to see how the school came together to create a remarkable evening of drama.

Creeping further into the Christmas mood, saw the Junior School House singing competition, where a number of Sixth Form students were involved in the organisation and coordination of their chosen house. There were musical numbers such as Feed the World, to All I Want For Christmas, with the ultimate winner Windsor (not biased) who did a mix up of Silent Night and Santa Claus is coming to Town. Special mention must go to the Windsor junior solo singers who did a beautiful job especially in front of so many people – and to Sam who dressed in a Santa Claus onesie that filled the whole song with the spirit of Santa.

The Christmas spirit continued with the annual Nine Lessons and Carols, that saw once again a collection of beautiful anthems by the choir and two striking Once in Royal David City solos on both nights. For some of the Upper Sixth it was a sad occasion seeing through their last Nine Lessons, particularly for the choir members who look forward to the event every year. It proved again however to be another memorable occasion to prepare everyone for the Christmas holidays.

However not soon after Christmas carols were sung, five individuals put on a Musical Theatre Night in aid of Sepsis Trust. Oliver Daniels, Alex Lavery, Tom Carson, Maddie Browse and Leticia Salmon all sang a collection of musical theatre songs ranging from Les Miserables, Phantom of the Opera, Legally Blonde and Miss Saigon. The evening raised over £1,000 for Sepsis trust which has already made significant progress and, with their analysts estimating that for saving one life for every £80 donated, it is not unreasonable or disingenuous to suggest that their endeavours will contribute directly to another 13 lives saved in the coming year. Everyone involved was very excited to see that all last minute preparations and hard work paid off to make a thriving evening.

The Christmas term exceeded expectations and appeared to be as busy as always and everyone was ready for the Christmas break despite preparing for their mock examinations in the New Year. It was even more impressive that our school community raised over £24,000 during the last term.

We all look forward to the surprises and opportunities the New Year brings us.