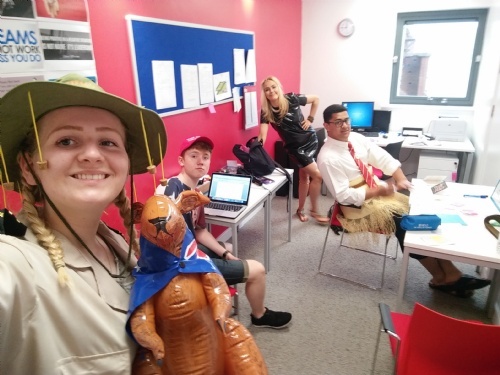 As much as it has been said before, and I’m sure will continue to be said into the future – this final year of school has honestly gone by in a flash, feeling like it could have been yesterday that we were appointed as Heads of School. Whilst my time at Solihull hasn’t been the longest, having only joined in the sixth form, it has been two of the busiest and most enjoyable of my life so far.

The year began for us as Heads of School with lots of challenging but important jobs such as the assignment of bencher duties. Once these were sorted, we took it upon ourselves to organise a number of events over the course of the year to really bring the two years together, and I feel proud to be part of the team that organised the first ever Hawaiian BBQ on the Cooper Building terrace, Solihull Winter Ball and the first Fish and Chips Quiz night.

I’ll really miss the regular meetings in our office, where we’d come together to try and sort out our various Heads of School tasks whilst also helping each other juggle the other parts of daily Sixth Form life. The Friday morning Heads of School breakfast with Mr Lloyd, Mr Morgan and Mr Emmett have also been a weekly highlight with the bacon and sausage sandwiches just about making up for the early start.

Although being a Head of School has certainly kept me busy this year, its really helped improve my time-management skills, and being surrounded by such a great team has certainly made the job a lot easier. I’ve absolutely loved the experience and hope that future teams enjoy it as much as much as we have!

The time has come to write the emotional finale blog. When looking back over this school year, it really sinks in how busy we have all been, alongside juggling the demands of school. We started off the year with the fresh new seats in the Cooper Building, and quickly settled into our new office space. With some dispute over who would claim ‘Locker 1’, the concept of being Heads of School really did start to kick in. Attempts were made at making the office personalized; we invested in office stationary, a motivational wall of sayings and our necessary supply of post-it notes.

To ensure that we were all settled into the Cooper Building, we organized Solihull’s first sixth form BBQ on the top floor. Filled with hot dogs and controlled alcoholic beverages, the rest of our year ahead was set in place. Although it wasn’t always fun and games… how could we forget the impending rush of university applications and personal statements! The office definitely became a newfound friend when writing our 100th personal statement drafts.

Although it has to be said once these were out of the way, we didn’t stop. Perhaps one of the biggest privileges of being one of the Heads of School is the honour of attending and representing the school at the numerous events Solihull puts on. These included Speeches; where all I had to do was say thank you to our guest speaker in front of a large audience. To this day it has probably been the most nerve racking time for me. Perhaps because I was in such astonishment at the guest speaker, Mr Little, a war veteran amputee who appeared on Strictly Come Dancing. It really did leave a mark on my memory. Not to mention the Chapel unveiling of the Sculpture ‘Conduct’, and speaking to the inspiring sculpture Matthew Sanderson. The Anne Frank Memorial Day coupled with meeting Mindu Hornick (a Holocaust Survivor) and Tomi Reichental (also a Holocaust survivor telling us his story ‘Close to Evil’) was also inspiring. Moreover, the planting of the Time Capsule and official opening of the Cooper Building where we got to tour Michael Burke, an influential journalist and newsreader, was also a highlight. Finally, not to forget our annual Nine Lessons and Carols.  All of these events reinforced how lucky I am to be at a school like Solihull, let alone have the opportunity to represent it at all these marvelous events.

The role itself however has not just been based around representing the school at these incredible events throughout this year. Aspects of the role that I will not forget include the newly introduced Winter Ball organized by the four Heads of School, where we discovered the talents of the teachers with Mr Cureton on keyboard and Mr Sandford-Smith on guitar and voice. There was also the night Ben and I were tasked with working behind the bar at the 70s and 80s night at school, where Mr Morgan and Mr Lloyd were cleverly disguised in fancy dress as they danced the night away. This was coupled with our humourous and of course productive Heads of School breakfast’s every Friday morning, when we would await Ben’s arrival and tuck into a well deserved bacon bap.

Perhaps a memory of Solihull as a whole and as Heads of School that I will never forget was being given the opportunity to ride on maintenance’s golf buggies around school as we prepared for an unforgettable Leavers Week. A life long ambition that I personally had was made true and we even had video evidence to prove it.

Although most importantly the thing I will miss the most, are those days where all four of us would engross ourselves in work in the office, or gossip about weekly happenings. When we might arrange the occasional set meeting, awaiting Ben’s arrival with his infamous daily chicken Panini in hand, or Moses’s infectious positive attitude as he would quote sport legends and Evie’s contribution of home baked cakes left over from math classes. I don’t think I will ever forget what a special team we became, staying true to our name as the Fantastic 4. It has been a pleasure to work alongside Ben, Moses and Evie and I will sincerely miss what a special team we had and wish them every success in the future.

A final note must be to wish good luck to the next Heads of School and their exciting adventure to come!

Despite being society’s most commonly used cliché, time surely does fly when you are having fun, and this year has certainly been testament to this. Having the opportunity to serve as Deputy Head Boy for Solihull School for 2015-16 has been an education, an endurance but above all a privilege and an honour. With our assistance needed as early as the second week of September during Speeches 2016, there have been many other memorable events throughout the year included the planting of the Anne Frank Tree by the Holocaust Survivor, Mindu Hornick, the anticipated Big Debate between Megan Lloyd, Zershaneh Qureshi, Katy Hatter and George Diwalker (both Solihull School Alumni), the planting of the Time Capsule and the presence of Michael Burke and many more.

Indeed, with the numerous events occurring throughout the year, as well as trying to balance this with sport commitments and of course keeping up with school work, it’s unbelievable to think that our time at Solihull School is over. For the four of us, our journey at this precious School has varied. Tisha was among the brave few girls who first joined the Junior School, whilst Ben and Evie joined at Sixth Form, and myself in Year 7. Yet despite our differences in years, all 4 of us have developed a love and a passion for the school that we believe will be hard to replace (challenge extended to future Heads of Schools!).

One of our biggest aims was to try and integrate Sixth Form Life and make the first year in the Cooper Building a memorable one, and we’ve achieved that through the number of socials that we have had, including our Hawaiian-Themed barbeque, the dazzling Winter Ball and finally the illustrious Pub Quiz Night to round it all off. Addressing this issue in assembly, there was the possibility of becoming too engrossed in the daily tasks of school life that you don’t take a minute to stop and ponder on the moment and appreciate it for what it’s worth. That’s what I would encourage each and every member of the Solihull School community; take a step back from the business of school life and the frantic and chaotic moments, and ponder and appreciate the moment of being with those around you, enjoying the perks of adolescence for when the end comes, nothing’s worse than regret.

They say that you only fully appreciate something when looking back in hindsight, and so whilst our departure hasn’t fully sunk in, it certainly has a space in our hearts. Considering that I started with a cliché, it only seems fitting that I end with one too; to all of Solihull School and Alumni – Carpe Diem (Seize the Day).​

My year on Solihull’s Heads Team has been a fantastic whirlwind of events, meetings and celebrations – not to mention making the most of our enviable office! There have been countless unforgettable opportunities over the course of the year; these range from hijacking the maintenance department’s golf buggy as part of our Leavers’ celebrations, to dining with the creators of the ‘Close to Evil’ documentary following its premiere. Christening the new ‘Eagles’ Nest’ with our weekly Bencher’s Brunch has also been enjoyable as we tucked into tasty refreshments over light-hearted updates and discussions.

Similarly, I will miss the increasingly informal Friday morning breakfast meetings where Mr Lloyd, Mr Emmet (previously Mr Sanford-Smith) and Mr Morgan would reflect on the past week’s affairs and plan for upcoming events.   Despite meaning a slightly earlier start, they helped me to settle into the role while offering useful, and sometimes entertaining, advice. With their support, we tried our best to strike an effective balance between trying new ideas while accommodating old traditions.

However, it has also proved challenging to juggle these exciting responsibilities with the daily requirements of Sixth Form life. Therefore, I think it has forced me to improve both my organisation and time management skills – standing me in good stead for my gap year and, later, university! Possibly my most potent reflection upon the year is how much of an honour it has been to work alongside Leticia, Ben and Moses! It’s safe to say that we’ve become a strong and interdependent unit, where I’m positive our friendships will continue regardless of what the near future has in store. I feel confident that this year has set a positive tone for the years to come in the Cooper Building and I offer my best wishes to the future Heads of School!