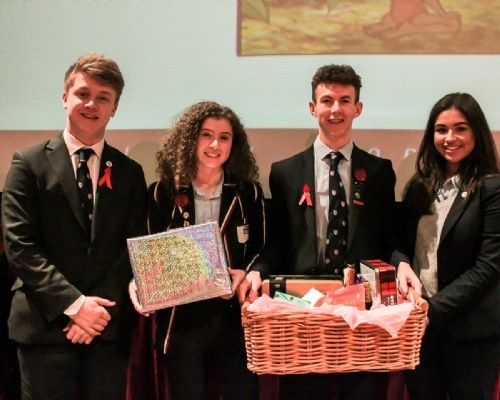 With over 120 former pupils having lost their lives in the War, Remembrance Day continues to be one of the most important events in the school calendar. Squadron Leader of the RAF Red Arrows and alumni Adam Collins, as well as a number of other guests, joined us to commemorate those who fell, with our Head of School, Cerys, laying one of the wreaths on our memorial.

Following on from the annual Remembrance Service, many pupils took part in our St Cecilia concert, with a short reprise the following morning consisting of Saxophony and Senior Wind Band; both audiences enjoyed all acts and we are thankful for all the pupils who continuously meet the demands of playing an instrument at school.  Our sixth form actors have also been busy preparing for an impressive production of Jane Eyre. With the evening promising to be a special one, four out of four performances, showcased in the Drama Studio, sold out.

Before Christmas Alex and Asha, as Economics students, had the privilege of attending a Masterclass by Sir Steve Redgrave, organized by the Entrepreneurs Circle, teaching us the importance of time management, setting achievable goals, and how to make them become a reality. The co-curricular activities did not stop there for the Sixth Form. With the Sixth Form Winter Ball under our wing, the integration between Lower and Upper Sixth Form this year is proving to be better than ever. The night was full of food, fun and lots of dancing with help from our Winter Ball Committee, headed by Jim and Asha.

The charitable status of the school is an important one and we have not been disappointed this half term. The George Hill building hosted a Funfair to raise money for Children in Need, raising in excess of £2,000. One of our Heads of School, Jim Bate, also grew a moustache in aid of Movember and over the past week, the Sixth Form wore red ribbons to recognise World Aids Day.

As Christmas approaches and the days continue to get shorter, nothing seems to stop the endless activities, which fuel the life and sense of community at Solihull. We look forward to the new opportunities and surprises that the New Year holds for us.