The first half-term with our new Heads of School 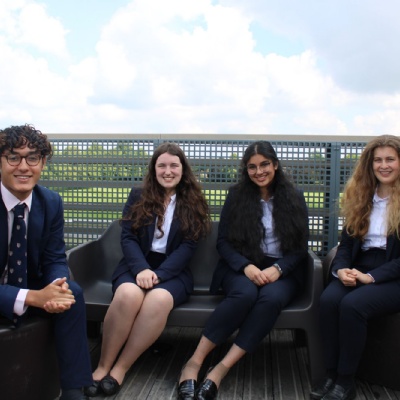 I am really excited be back at school, welcoming old friends and new faces, it’s great to see everyone settling in so well. Over the past few weeks we have watched the community come back to life after a really tough year.

We are looking forward to getting to know pupils and staff better after the half-term break and are excited to continue enjoying the various events coming up later this term including assemblies and other whole school activities.

We are thrilled to see the campus come alive and see everyone in the community who has been so resilient over the past year through all that has been thrown at us, and we hope that you too are liking the return to some normality. We are aiming to make this year a reset year when we can all embrace freedom again.

Shrujal and I were previously pupils at Saint Martin’s, so we are enjoying being part of the Solihull community as it evolves and unites. We have felt very welcome at Solihull and hope that all the new starters feel the same. Emma also joined from another school, starting in Lower Sixth. Freddie, however, has been a longstanding pupil at Solihull, he has been here since J1, so has in depth knowledge and experience.

We have faced many challenges in the past year with COVID-19, but that is not the only challenge our generation faces. This year, as Heads of School, we aim to create a more environmentally friendly and sustainable school where we provide skills such as Carbon Literacy Training in order to make long-lasting change and be front-footed in tackling the climate crisis. We’re excited to make a difference.

Freddie writes about The Equity Group

The year has begun with a great start, and I’d like to highlight an important Equity Group project which came to fruition. At the end of last year, a small number of Equity Group members (Hiba, Hannah, Anna, and myself) took the idea of a rainbow zebra crossing to the School Leadership Team. We were looking to develop something similar to the creations that have appeared in big cities around the world, including Birmingham.  We are proud to say, our initiative was approved, and we worked towards the design installation over a series of meetings. The result is amazing and the Progressive Pride Flag you can see between the Refectory and Science block en route to The George Hill Building. We hope this symbol of the school’s united mindset of diversity and against discrimination, officially named the ‘Equity Flag Crossing’, will last for years to come. We now look forward to upcoming projects led by other members in the community in relation to Black History Month, Human Rights Day and World AIDS day.

Last year I founded Girl Up Solihull, and I am therefore delighted to continue the club this academic year. Girl Up is a campaign of the United Nations Foundation to give youth a platform to advocate for and further gender equality.

Last year, in spite of COVID-19, we managed to successfully introduce this initiative. Projects included a poster competition on International Women’s Day on the theme ‘Choose to Challenge’, sparking reflection on how we can challenge gender inequality in our surroundings, and a charity Bake Sale in June, raising enough funds for UNHCR to educate 11 refugee girls for a year.

We have been encouraged by strong support this half-term. Our Period Product drive has already seen many donations to assist those who are in need in Solihull and tackling Period Poverty, which has increased over lockdown. We look forward to continuing this student-led initiative championing gender equality, exploring it on a local, national and international level.

In the Lower Sixth, I took part in the Sixth Form Science Society in order to share my passion of Science and STEM subjects with others. It’s always amazing to learn something new about our complex and complicated world and being able to share some of that awe and wonder with others is not only enjoyable, but also important when thinking about the future of the scientific world.

Being a part of the Science Society allowed me to explore and research topics which are outside the A Level syllabus and enabled me to develop my own scientific thinking and my research skills which I’m sure will be handy later on. As well researching, I also had the opportunity to present my findings to the rest of the school.

Last academic year, the Science Society produced many events and activities – these included talks and assemblies. Through thorough research and planning, we aimed to inspire other students to use and explore their own scientific curiosity, especially younger pupils who had perhaps just started their scientific journey. We wanted to open their eyes and give them a taste of all the vast number of different subjects and topics that ‘science’ as a generic term involves, enabling them to appreciate and learn something new about the world around them. I, myself, did a talk called ‘What makes humans so special?’ where I explored anthropology and evolution; this question had been one that I’d been wondering about for a long time now, and being able to research and present this topic not only gave me the answer that I had been looking for, but I was also enabled me to share my answer with other people who also may have had the same question. As well as my talk, we had several other presentations, each exploring a unique topic, piquing the interest of those listening.

The world of science is constantly evolving and there is always something new to learn, something new to test, something new to hypothesise. I encourage you to sign up and take the initiative to find out more about the world around us. To quote the famous astrophysicist Neil deGrasse Tyson, “Science is a way of equipping yourself with the tools to interpret what happens in front of you.”

Wishing you all a wonderful half-term break.