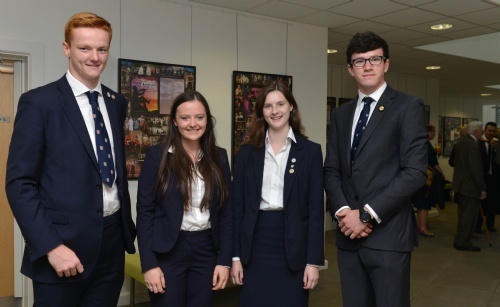 Another year has begun and it seems remarkable that it is our final year at Solihull School. There have been many developments over the summer holiday- one was very obvious on our first day back; construction had begun on the new Sixth Form Centre. It will be interesting and exciting to see how the development progresses over the next few months! Others took the form of trips and tours over the summer.

In July, the girls' hockey and netball teams went on tour to South Africa, and were soon followed by the boys' rugby teams. Opportunity at Solihull is in abundance and Poppy Eales and Joe Lankester can certainly say it was an unforgettable experience, as are many trips which pupils embark on during the holidays. Sport was obviously central to these tours, but there was also time to experience an African safari. As well as this, we met local children in townships, which was remarkably humbling and eye-opening.


A Lower Sixth pupil, Leticia Salmon, took part in an expedition to Kenya this summer having been selected from a nationwide CCF/ACF initiative. The expedition included climbing Mt. Kenya, peaking at 4,985m and building a primary school out in rural Kenya amongst many other things.

A co-curricular activity that many pupils choose to undertake at Solihull is the Duke of Edinburgh award scheme. This summer has seen groups completing their Gold and Silver award respectively - a feat which must not be underestimated! The expeditions entail a gruelling week of camping and walking, which was made particularly challenging by the presence of Hurricane Bertha this summer.


Life in the Upper Sixth is very busy at the moment; not only do we have to balance our A level work but there is the added pressure of the University application process. Auditions have also taken place this week for the whole school musical Les Misérables and there is an excited buzz around the Sixth Form Centre; set to continue for the foreseeable future.