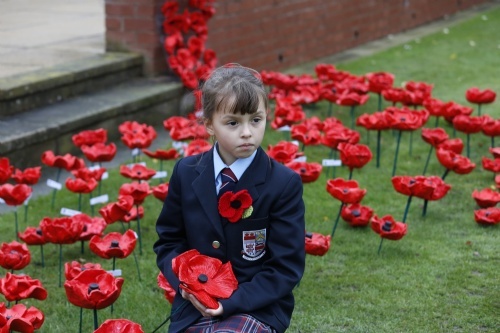 The 4th of August 2014 marked the 100th anniversary of Britain’s entry into World War One. What many assumed would be over by Christmas lasted another four years, finally ending on Armistice Day, 11 November 1918.

Pupils have been taking part in a month-long series of activities across the school to commemorate the centenary of the War. These have included translating German postcard captions during language lessons, studying war poetry in English Literature and looking at how perceptions of war have changed from Classical times to the present day. Also, having been inspired by the Blood Swept Lands and Seas of Red installation at the Tower of London, the Shell Form took on the task of creating 200 ceramic poppies in their Art lessons for the Remembrance service.

Each year at Solihull, we assemble to remember the fallen in the Quadrangle, where wreaths are laid and the Last Post is sounded. The ceremony is always a moving event but this year it was particularly poignant, as it included a roll call of the 55 Old Silhillians who lost their lives during the conflict. Afterwards, the Sixth Form gathered in the Chapel for a Service of Remembrance.  John Loynton, the School’s archivist, has just published his book entitled ‘Solihull School During the First World War.’ It provides a fascinating and vivid insight into what the School and its pupils endured during this difficult time.

On a different note, this week saw the annual charity hockey match for Children in Need between the Boys 1st XV Rugby Team and the Girl’s 1st XI Hockey Team. To the girl’s annoyance, the boys narrowly came out on top after a tight 1-1 draw game with the final result being down to penalties. Both teams played well and enjoyed raising a large amount of money for such a great cause.

With Christmas looming, preparations for the annual Christmas Fair are underway, as well as the early stages of rehearsals for the School Musical, Les Misérables. The Christmas Term has flown by and with only a month left, time is rapidly ticking by for the UVI pupils as we are now in our final year. It is safe to say that the run up to the final Christmas at Solihull will be a happy but emotional one.