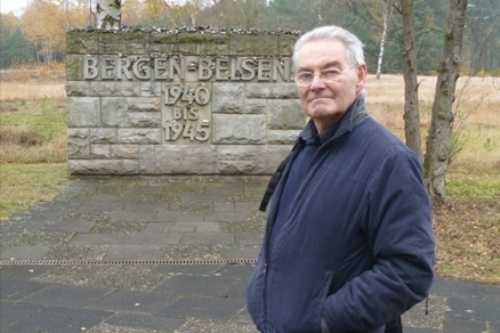 We were recently very fortunate to host the British premiere of Close to Evil, a film made by acclaimed producer Gerry Gregg and RTE, the Irish State Broadcaster, telling

Tomi Reichental’s story of Bergen-Belsen: his captivity, the loss of 35 members of his family, the brutality of the SS guards and eventually, his liberation.

In short, Tomi kept his story secret for 55 years and when he eventually shared it, the process started a journey which has thus far seen him talk of his past in over 500 schools in Ireland, where he now lives.  More recently, his story has been in demand in the US and I hope the UK follows suit very soon.  Moreover, Gerry is seeking financial backing for a third film with Tomi and it is my sincere hope that one of the major TV companies or philanthropic individuals step forward to help with the cost of making another important historic record.  Among many awards for his tireless efforts to promote racial and religious tolerance and to further reconciliation, Tomi is most proud of the award bestowed upon him by the Federal Republic of Germany.  In 2013, the German Ambassador to Ireland presented him with the Order of Merit of the Federal Republic of Germany, the highest tribute payable to an individual.

Before saying a little of the story, Tomi has given me permission to share two stories he recounted over supper the night before he spoke here at Solihull.  The first was about being marched to the shower block, not knowing whether gas or water would come from the showers and the second story was about playing football around the camp as a young boy surrounded by corpses in the same way that young boys and girls today play football surrounded by blazers and school bags.  All of us around the dinner table struggled to comprehend the emotions Tomi and others experienced when water, instead of gas, came out of those shower heads or of the overpowering smell survivors often talk of emanating from decaying bodies. It’s so easy to say that we can understand how others might have felt, but in this case that would have been a lie, certainly for me anyway.

Turning to the film, it centres on two specific events.  Firstly, Tomi learned that the female guard, Hilde Lisiewitz, responsible for his block in the camp was still alive, so he set about trying to meet her for the purpose of reconciliation.  Hilde spent one year in prison for war crimes in 1945 but now resides in Germany as a 94 year old pensioner.  Initially, Hilde was prepared to meet Tomi, but subsequently declined. However, the most disturbing feature of this episode for me is Hilde’s complete denial of any wrong doing whatsoever, even claiming that the prisoners were fed well and cared for.  She was recorded by the Bergen-Belsen museum and at one point suggested that prisoners were given soup and hot chocolate and places to sleep on the horrific death marches which claimed the lives of so many innocent victims.  I suspect there are many in denial, but what makes Hilde different is her willingness to go on record and publicly deny any mistreatment of those imprisoned for their ethnicity, religion, sexual proclivity or disability.  Not only that, but she took her three children to see the concentration camp where she had practiced her brutality, witnessed by survivors who have since gone on record about Hilde. Interestingly, whilst visiting the museum Hilde unexpectedly spotted a photograph of her amongst other SS officers on trial and ushered her children away for fear of them recognising her.

The second incident involves the high ranking officer and close aide to Adolf Hitler, Hans Elard Ludin, who was instrumental in sanctioning the death of so many of Tomi’s family.  Tomi managed to track down the officer’s granddaughter, Alexandra, with whom he met and formed a very special bond.  Going against the wishes of many of her family, she invited Tomi to visit her grandfather’s grave.  Amazingly, Tomi agreed and they shared a very poignant moment together at the foot of Ludin’s grave.  What struck me most about Tomi was his lack of hatred and the reconciliation in his heart, a big heart we can and should all remember and learn from.

Of course, Holocaust education is important and many would say that we don’t do enough to understand the atrocities, but forgiveness and perspective are two very important life lessons I took from meeting Tomi, Gerry, Tomi’s partner Joyce and Colm O’Callaghan from RTE.  Tomi’s humility and modesty are quite remarkable and he spent two days here continuously thanking me for hosting him and the event.  Tomi, you got that bit very wrong; it’s me and the entire Solihull community that should be thanking you for coming, sharing and educating us all.  You said that we must remember them – six million Jewish people – and I can reassure you that we will never forget them and that we will never forget you.  I hope we have formed bonds of friendship that can never be broken and I look forward to seeing you again.  For now Tomi, goodbye and God bless.

Read more about the event here.