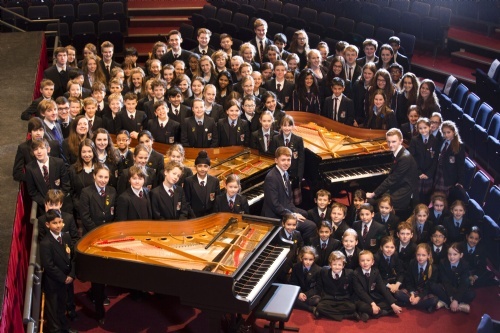 Solihull School welcomed the arrival of three Steinway grand pianos this week. The instruments, including a Concert Grand Model D previously played in the Royal Albert Hall, were installed with an exclusive performance from internationally renowned pianist Peter Donohoe.

Peter, who lives in Solihull and opened the David Turnbull Music School four years ago, has produced a series of CDs, performed with hundreds of orchestras all over the world and was awarded a CBE in 2010.

The accomplished pianist was joined by several of our most promising pupils who performed a series of solos and duets, as well as the premiere of a piece specially composed by the  Head of Academic Music, Simon Phillips, for three pianos.

The addition of the Steinways is another boost for Solihull’s music department which is currently going from strength to strength. The school’s choir has been invited to perform at St Paul’s Cathedral for an unprecedented third time in 18 months and has recently broadcast on BBC Radio 4’s Morning Service.

Tim Kermode, Director of Music, is thrilled to be able to provide our students with the opportunity to develop their talent on these world-class instruments. Delivery of the pianos is the first step in a blossoming relationship with Steinway, and allows us benefits such as access to the magnificent Steinway Hall in London.