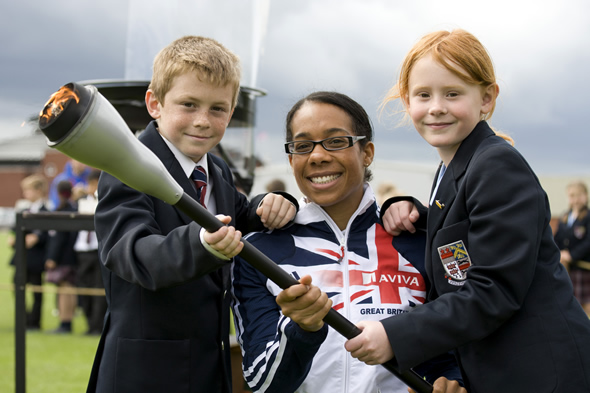 One of the most thrilling days in Solihull School's sporting history reached Olympian heights as 400 children from 12 schools took part in a star-studded Olympic Day.

Commonwealth 400m silver medallist and Birchfield Harrier, Nadine Okyere, led a spectacular opening parade of competitors all aged nine to ten before lighting an Olympic flame in the grounds of the co-educational independent school.

Nadine inspired the children with a talk about her blossoming career in Solihull School's Bushell Hall and said: “If at first you don't succeed, don't give up and keep pushing yourself and your friends as that extra encouragement can make all the difference.”

Former World champion, European and Commonwealth 400m champion, fellow Birchfield Harrier and Solihull School past pupil Daniel Caines backed up her message. He spoke of his years aged 11 to 15 when he didn't win a single race and of having at one time the slowest time in the Midlands Championship and how glad he was not to give up.

Daniel stayed the entire day to present all the medals at an Olympic style winners' podium. He was accompanied by the new Mayor of Solihull Cllr Ken Hawkins who presented  an Olympic torch to each gold medal to hold in their moment of glory.

Both Nadine and Daniel were joined by a third Olympian, Chris Mayer, a veteran of Atlanta with 171 England hockey caps and now Director of Hockey at Solihull School.

Both key figures in the Olympics-inspired In the Zone elite achievement in sport programme, they gave an enthralling demonstration of how the body works during sport.

David E J J  Lloyd, Headmaster of Solihull School, said: “The success of our Olympic Day exceeded all expectations. Our guests were clearly thrilled to meet our Olympians and to take part in games and workshops that were relevant to everyone.”