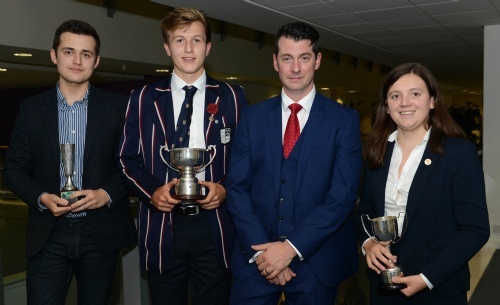 Cassidy Little, the Royal Marine amputee who was crowned champion of the first ever People’s Strictly on BBC One, was the inspiring guest speaker at Solihull School’s speech day.

Mr Little, who lost his right leg below the knee during a tour of Afghanistan in the summer of 2011, spoke about his battle to regain both his fitness and mobility, which culminated in his winning the nation’s vote in the People’s Strictly for Comic Relief in March.

He told pupils that lifting the glitterball trophy with his dance partner Natalie Lowe, live on Comic Relief, marked the start of an “incredible” new chapter in his life.

Headmaster, David Lloyd said: “ The pupils were absolutely spellbound by this war hero and were fascinated to learn that he was an avid dancer with a degree in music and dance; hence his overwhelming desire to compete in Strictly.

“He was a Royal Marine medic when an improvised explosive device went off, causing three fatalities. Despite his horrific injuries he selflessly attempted to tend his colleagues on the ground. He was well known for his upbeat attitude during rehabilitation, which kept up the spirits of those around him. He was a true inspiration to our pupils.”