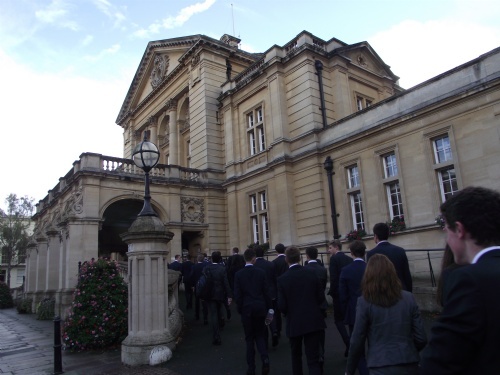 The Sixth Form Economics and Politics students attended the Cheltenham Literature Festival to join the audience of discussions between influential economists and prominent people in business .

On Monday, students watched as BBC News Business Editor, Kamal Ahmed, led the discussion on entrepreneurship. Joining the reporter was Annabel Karmel, children’s food expert and best-selling author, as well as restaurateur and founder of Leith’s School of Food and Wine, Prue Leith. The two revealed the stories behind their success and shared their advice to the aspiring entrepreneurs.

Tuesday’s talk was focused on the European Economy, the Greek bailout and the possible outcomes of Britain leaving the EU. The debate featured an expert panel, including Sunday Times Economics Editor, David Smith and author of Greekonomics, Vicky Pryce.

“It was interesting how often the panellists disagreed between themselves, reinforcing the idea that much of economics is based in opinion. With the economic knowledge that we currently have, we were able to evaluate and develop the ideas that were put forward by the panellists and so consider the potential impacts of the decisions that could be made.

“The discussion was very informative and I’m sure many of us would be eager to revisit the festival next year, whatever the global issues may then be!”