Lower Sixth English and Drama students were treated to a talk in the Bushell Hall about his career so far and the art of screenwriting, where he spoke of the challenges and successes of writing Cold Feet. Later in the day Bullen hosted workshops with small groups of Lower Fifth and Lower Sixth Drama and Theatre Studies students to discuss their GCSE and A Level devised projects.

Mike Bullen attended Solihull School from 1968-1978 and spoke fondly of his time here. Some of the characters in Cold Feet were also inspired by Bullen’s friends at Solihull. Pete was based on his best friend at Solihull (Mark Taylor) and Jenny was also based on the wife of another friend at Solihull.

“His relaxed and casual manner created a comfortable atmosphere in which we could all express our ideas, and we related to and learned from the different ideas he introduced. Overall, Mike Bullen is a person we can aspire to be,” said Sixth Form student Joshua Newby. 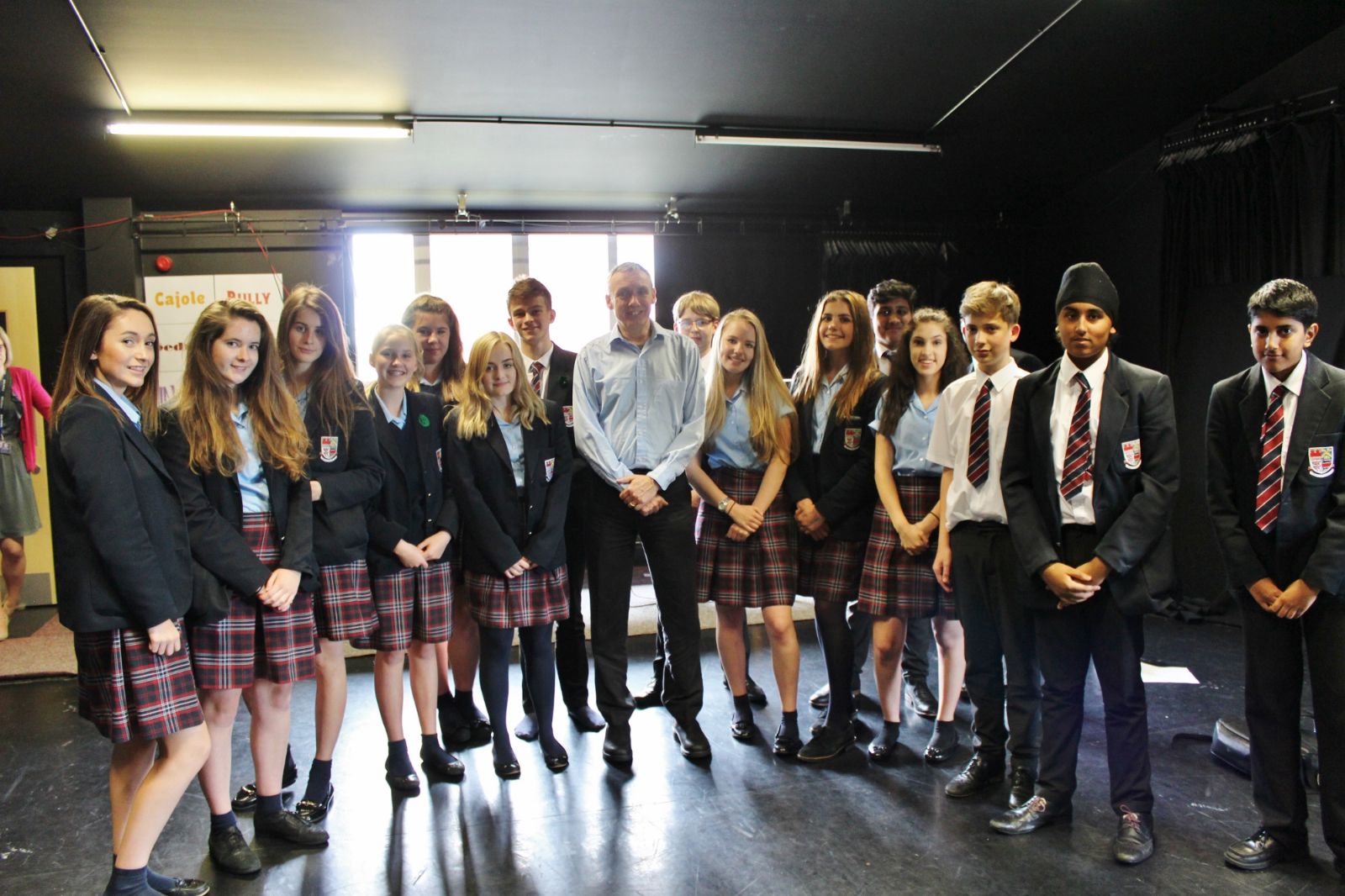 We briefly talked to the writer about his time at Solihull.

“My fondest memory was probably when we did a Sixth Form play. I think we did the first Sixth Form play, which we were encouraged to do by the Headmaster at the time. I think it was the time when the Benchers had a drink at his house and he talked us into doing it. He did that thing where we thought we’d come up with it but basically we’d been manipulated by him. He gave us the script. It was based on the McCarthy period in the States, called The Investigator. It was just organised by us, and the teachers weren’t involved at all. I fondly remember that the play was great fun and it brought the Sixth Form together. I remember it being pretty good, I was directing it.

How do you think your experiences at Solihull have influenced you in later life?

“The Sixth Form did the school Chapel Service once a week, and it was always the same group of people leading every week. I asked the Reverend at the time if a couple of mates and I could do an alternative point of view. This is back in 1977/8, and he allowed us to do in effect an atheist service in Chapel. Looking back it was amazingly broad minded of him, and the school, and the Headmaster to allow us to do that. That’s what I take away from Solihull, that at that time it was a very forward-looking place. You were encouraged to think for yourself. For a lot of schools now it’s about churning out kids with good grades, and of course it was still important then, but there was a much greater emphasis on our development as people. It gave me a great sense of community, which I think you see a lot in what I write about, but also it gave me confidence to have courage in my own convictions. It was a place that encouraged you to think.”

“It’s been weird. It’s a weird experience coming back to somewhere that’s in your DNA. I’ve walked around that quad so many times, and today the Head of English (Mr Hart) said “Oh we’ll just walk across the quad”, and my footsteps faltered because I thought “We can’t walk across the quad!” It’s been a lovely experience because I am very, very fond of this place and there are parts of it that I know very well and parts that I don’t know at all. It’s pretty impressive. I thought it was grand when I was here but it’s grander. In terms of what’s been the best part, I had a session with a group of Lower Fifth pupils and we were talking about a piece they’d written and discussing their motivation, and there was just a moment when they started talking amongst themselves – really examining the motivation for the story. I was irrelevant, and that was very satisfying because that’s what writing is about. It’s about teasing out what the truth is and what you’re trying to say. I saw this spark suddenly catch fire.”

Solihull School will be hosting its next open day on Saturday 24 September, with Entrance Examinations for September 2017 taking place on Saturday 5 November. To learn more about Solihull School, please visit our Why Solihull? section.