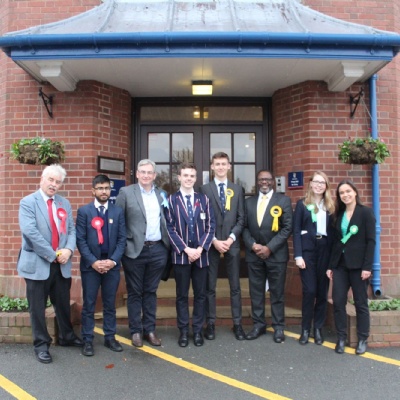 Election candidates have been given a ‘Question Time’ style grilling from Solihull sixth form students.

Conservative Julian Knight, Labour candidate Nick Stephens, Ade Adeyomo, of the Liberal Democrats, and the Green Party’s Rosemary Sexton are all contesting the Solihull seat at the December 12 General Election.

The four were quizzed by pupils on subjects ranging from Brexit and the NHS to crime and the economy during the special event.

Solihull pupils are holding their own election campaign within the school, with students teaming up with their respective party candidates for the Q&A session. Results of the school’s election will be announced following voting on December 12.

Head of History and Politics Gareth Affleck said: “This was a great opportunity for the students to engage with the political process.

“There were certainly some tricky questions posed to the candidates over a wide range of topics and it will hopefully help the students to make more informed decisions concerning their futures.”

Solihull School also hosted pupils from Saint Martin’s and Solihull Sixth Form College at the hour-long event, which saw the would-be MPs mixing with students afterwards to carry on discussions.