Remembrance Service and the unveiling of our new War Memorial 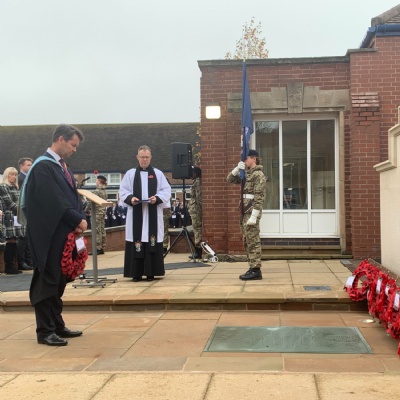 Pupils, staff, governors and specially invited guests gathered in the school’s Great Quadrangle on Thursday 11 November to remember those who died in two World Wars and other conflicts, with pupils not attending in person accessing the poignant occasion via live stream.

This year’s ceremony was particularly memorable as, prior to the annual Remembrance Service, Old Silhillian Roy Ward MBE and Acting Headmaster Sean Morgan unveiled the school’s new War Memorial, which was commissioned to mark the centenary of The Old Silhillians’ Association and to celebrate the bond that exists between Solihull School and former pupils.

In March 2021, Solihull’s Director of Development and Alumni Relations, Lucy Lunt, launched a campaign to replace the old war memorial, which was worn and weathered. Over six months, the ambitions target of £30,000 was achieved, with donations from 287 former pupils, parents and staff and, in September, Weldon Stone commenced work on the new piece accurately listing in full the names of Solihull School’s fallen.

Former pupil Roy Ward MBE, who attended Solihull School and was present at the first war memorial unveiling in 1947, said: “74 years ago, I was in my first term at this great school and attended the unveiling of the old war memorial which is now being moved to another part of the campus.  I can remember acknowledging at that time, just two years after the war, how important it was to remember and honour all those brave men and women who had made the ultimate sacrifice to protect our tomorrows.  But, remembrance has more significance to me now than ever, which is why I have so enthusiastically supported this venture and am greatly honoured to be asked to unveil the new monument.”

A rendition of the Last Post was played by Kieran Bown, followed by a two-minute silence, the Reveille, and a Roll of Honour, before the Acting Headmaster recited the traditional tribute to The Fallen. The Act of Remembrance was followed by a Sixth Form Chapel Service.