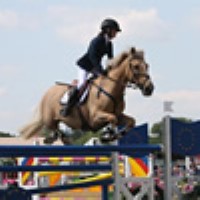 A talented 15-year-old from Solihull School has hit the heights in the world of show jumping by qualifying for the internationally prestigious British Masters.

Georgia Lovett, a member of Solihull Riding Club, is one of only 24 riders from across Britain to have reached the finals of the national pony event at the last major horse show before the London Olympics.

Georgia jumped her way through three qualifying rounds in one day to reach the climax of the John Whitaker JA Championship, which will be held alongside the senior events at the South View Equestrian Centre in Cheshire from June 28 to July 1.

She will also be taking part in a viewing trial at the British Masters for the Pony European Championships at Fontainebleau in France to be held later in July.

Georgia, who lives in Earlswood, will be riding her 148cm Irish pony Knockmartin Gold on which she achieved one of her ambitions last year of reaching Junior Show Jumper at the Horse of the Year Show at Birmingham's National Exhibition Centre.

Her 2011 successes also included winning England team gold in the Scottish International at Rowallen and being short-listed three times for Home internationals.

Georgia won her first gold medal in 2007 in the ten and under category at the Great Britain Championships on her first 128cm pony Mica Hot Chocolate.

Her mother Julie Lovett said: “We are delighted with Georgia's success in her final year on ponies before she goes on to horses. Competing in the Masters will give her the opportunity to experience the atmosphere of top-class international competition.”

She added: “We are very appreciative of the support given by Solihull School, which has enabled Georgia to remain dedicated to both her sport and her school work in which she achieves exceptional grades.”