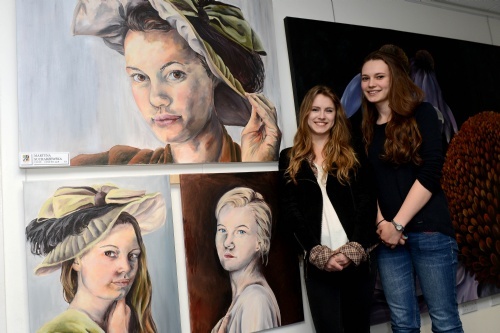 The Vice-Chairman of West Ham Utd FC and star of TV’s The Apprentice, who was this year appointed a CBE for her services to women and entrepreneurship, joined other parents, pupils and friends at the event, held over three floors of Solihull’s modern George Hill Building and adjoining School House.

Karren and her husband, former international footballer Paul Peschisolido, were able to view more than 1,000 pieces of artwork created by pupils on A-Level Art & Design and Photography courses to all years of Solihull Junior School. It included A-Level photography submitted by their daughter Sophia Peschisolido.

Karren Brady, who presented certificates of thanks to the participating schools, said: “A collaboration such as this of local schools and local talent coming together in this school is remarkable and I congratulate everyone involved.”

She added: “Learning the ability to express yourself, whether through communication or your work, is a vital preparation for life and I think the wonderful artwork we see here at this exhibition shows that these creative young people can approach whatever they do in the future with confidence.”

The exhibition, which included live entertainment from a young violin duo from Solihull, also provided an occasion to pay tribute to John Nickson, who is retiring at the end of the summer term as Head of Art after 35 years’ service to the School, and to congratulate Donna Trim on her promotion as John’s successor.