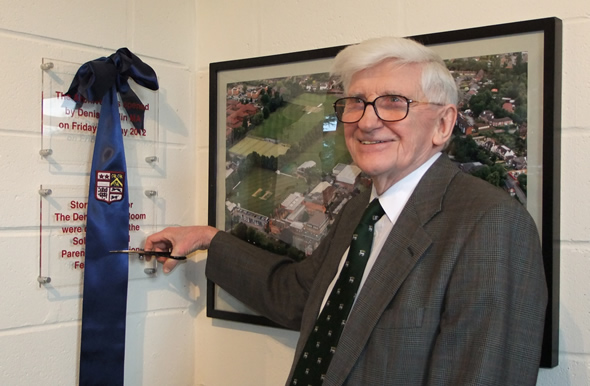 A teacher who became Second Master, Headmaster and Governor in an association of more than 50 years with Solihull School has had a new Archive Room named after him.

Denis Tomlin, who was latterly Honorary Archivist until retiring in 2007, was given the honour of cutting a ceremonial ribbon to officially launch the facility, which charts the history of the independent co-educational school from its beginnings in 1560.

The Denis Tomlin Room, partly funded by Solihull School's Parents' Association, contains a stunning time-line wall chart depicting key landmarks in the life of the school as well as scores of fascinating exhibits including old uniforms, exercise books and photographs.

The display includes the visit to the School by Her Majesty The Queen in 1962, including the spade she used to plant a tree in front of its new chapel to celebrate the school's 400th year, as well as a film of her visit shown recently in the ITV programme 'The Queen and I'.

Headmaster David E J J Lloyd, Chairman of the Governors Mark Hopton, and School Bursar Christopher Warren welcomed a number of other guests including former Headmaster Giles Slaughter and his wife Gillian, and Beth Pittom, former Assistant Matron and Housekeeper at what used to be the School's Kineton boarding house.

Denis Tomlin acknowledged the efforts of the Headmaster, Bursar and Governors in driving the archive project forward and the work of his successor as archivist, John Loynton, in displaying all the material in the collection saying: “Thank you for the honour you have done me in allowing this splendidly presented library of material to carry my name”.

Housed in a completely refurbished old music school on the Warwick Road campus, the Archive Room's earliest exhibit is a well-preserved maths exercise book from 1793.

More recent items include a big bass drum that was played by cadets from before the First World War, and a cane used for administering corporal punishment long since retired.

Archivist John Loynton, who wrote a history of Solihull School published in 2010 to celebrate its 450th anniversary, said the Archive Room project took 18 months to complete

“We have received an overwhelming response from past pupils, many of whom have donated items or loaned us items for copying. The Archive Room encapsulates the School's great heritage and is sure to lead to even closer links with its alumni,” he said.

“I hope the exhibition will continue to grow. On our wish list are a herring bone school suit from the '50s and '60s, a charcoal grey uniform from the school's former outfitters Manley's or Foster Brothers, and any caps, ties and house rugby shirts,” John added.