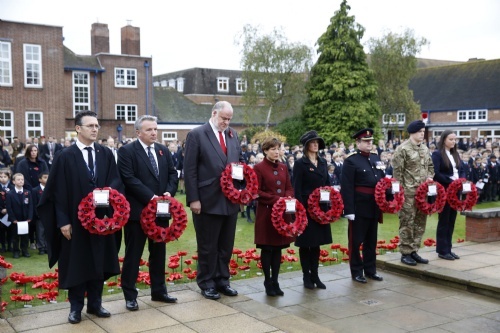 Combined Cadet Force staff and former pupils who have served with the Armed Forces joined all 1030 pupils and staff at Solihull School for the Remembrance Day wreath-laying ceremony, followed by a Service of Remembrance in the School Chapel. The ceremony included a roll call of the 55 former Solihull pupils who died during World War One. Pupils have taken part in a month-long series of activities to commemorate the centenary of the Great War, including themed lessons across a broad range of subject areas from Science to Classics and Drama. Pupils from the Third and Shell forms also created a stunning display of 200 ceramic poppies, inspired by the Blood Swept Lands and Seas of Red installation at the Tower of London. Members of the Armed Services also joined pupils for a Careers talk and lunch.