Solihull has been in continuous existence since 1560, when the chantry revenues of the Chapels of St. Mary and St. Katherine, in the Parish Church of St. Alphege, were used to establish the Foundation. Originally, the Foundation provided for the maintenance of the Master of the Free Grammar School in Solihull. In 1615, the school moved to a house in Park Road, later re-named Malvern House. It remained there until 1882. 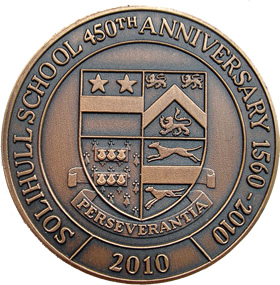 In 1882, the school moved to its present 50-acre site. School House is the original school building on this site and it was designed to provide accommodation for 80 day-boys and 20 boarders. It cost £4,345. At about the same time (in 1879) the Endowed Schools Act produced a new scheme of management. The Feoffees were replaced by a Board of 13 Governors and it was this Governing Body that moved the school to Warwick Road.

Since 1882, the school has gradually expanded in numbers and buildings. In 1946, the school became an independent school, breaking its links with Warwickshire County Council. In 1948 the Headmaster, Mr H B Hitchens, was elected to the Headmasters' Conference and in 1949 the school was admitted to the Governing Bodies Association. The school’s charitable objects are to provide the advancement of education by providing an independent day school for boys and girls in Solihull, which shall have a religious character in accordance with the tenets of the Church of England and provide a liberal education. The school is a religious foundation and is fortunate to have its own Chapel, consecrated in 1961, and its own Chaplain. Each section of the school attends a Chapel service once a week. There is also a mid-week celebration of Holy Communion and on Sundays there is a celebration of Holy Communion in the morning and an evening service open to parents, pupils and friends of the school. The singing of the Chapel Choir forms an important part of these services. The Chaplain not only conducts these services and prepares candidates for confirmation, but is also an important figure in fostering the moral and spiritual welfare of the pupils.

The school is increasingly diverse in the religious backgrounds of its pupils. It is, of course, open to parents to ask for an exemption of pupils from classes and services on grounds of conscience. However, every attempt is made to ensure that religious observance and the teaching of Religious Studies are as inclusive as possible. In particular, the teaching of Religious Studies encourages an understanding of different religions. Through these lessons and through the teaching of Personal, Social and Health Education (PSHE) the school also encourages pupils to think about their values, their relationships with each other and their role in society. At independence, the Local Education Authority agreed to pay the fees of 15 boys from local primary schools. This number increased to 36 in 1953 and this arrangement continued until 1973 when the reorganisation of education in the Borough ended the scheme. In response to the ending of free place pupils, the Governors created a large Foundation Scholarship scheme to enable academically able pupils to attend Solihull School. At the same time it was decided to admit girls into the Sixth Form. In June 2003 the Governors decided that the school would become fully coeducational in 2005, taking girls as well as boys into the Junior School and at 11+. Major improvements occurred in the last twenty years of the twentieth century, with improved facilities for Science, Design and Technology, Modern Languages and the Junior School.

The Bushell Hall was completed in 2001 and the existing hall converted into the Kent Library. A new pavilion, The Alan Lee Pavilion, was completed in 2003 to supplement the improved PE facilities and a new outdoor activities centre replaced the CCF hut in July 2004. In 2005 a new teaching area, The George Hill, was completed, providing 16 new classrooms and additional social and study space. The Junior School was extended and refurbished in September 2005. In 2009, the David Turnbull Music School was completed, and in 2015 the new Sixth Form centre The Cooper Building was opened. In November 2019 Solihull launched its newly refurbished refectory.

David EJJ Lloyd is the Headmaster of Solihull School.