Outdoor Education forms an integral part of our co-curricular provision. As with all outdoor education it is hoped that a lifelong appreciation of nature and the outdoors is formed. A unique range of opportunities for pupils to experience the positive benefits of outdoor education are provided. A number of these activities have been part of the fabric and heritage of the school for many years. From Terriers in the Thirds, through to Snowdonia School in the Shells, the Duke of Edinburgh’s Award, and CCF from Fourths onwards, there is an opportunity for all pupils to become involved in some sort of outdoor education over the course of their time here.

Terriers is a non-military organisation inside the school curriculum especially designed for pupils of Third Form age.   It meets weekly for two periods on a Thursday and aims to extend the horizon of pupils by introducing them to outdoor activities which are not only of an adventurous nature, but also give an understanding of the countryside around us.

In the first half of the year, pupils undertake courses for the award of a First Class Terriers Certificate.   In this, various skills such as basic first aid, climbing, abseiling, map and compass work, orienteering, knots and water safety, are taught and examined.   In the second half of the year pupils take part in a wide range of topics, including canoeing, camp cooking, command tasks, kite-flying, advanced climbing, safe cycling, cycle maintenance and shooting on the school’s indoor range.  These courses are not assessed.  The pupils are taught by members of staff and by Sixth Form instructors.  Details of the uniform can be found in Appendix D.

Every pupil in the Shell Form attends Snowdonia School. Snowdonia School involves spending a week at the school’s cottage, the David Fricke Mountain Cottage in Mynydd Llandegai in Snowdonia, with a group of approximately 15 other pupils.  Three members of staff, plus a senior pupil, lead the week’s activities during which there is the opportunity, for example; to go mountain walking, when possible, to the top of Snowdon, visiting a castle and Anglesey, canoeing, rock climbing and visiting a local slate mine. The experience of living together in a small community away from home is also very valuable. This experience also leads into the opportunities provided by the CCF and Duke of Edinburgh’s Award Scheme in the Fourth Form and beyond.

The Combined Cadet Force is open to all pupils in the Fourth Form and above: many pupils also join the CCF on entry to the Sixth Form.  In 2019/2020 there were over 80 pupils in the CCF. There are two sections, the Army Section and the RAF Section, and the organisation operates out of The Martyn Garner Building for Outdoor Education on the Field of Mars. The weekly parades take place on Monday after school and there is NCO training for pupils in the Sixth Form during Enrichment on Monday period 3. In addition, there are many opportunities throughout the year to be involved in various activities. These can include camps in the summer and at Easter, military training weekends, signals training days, shooting competitions, flying and gliding. The activities of the CCF are often linked in with the Duke of Edinburgh’s Award Scheme, and some of the activities can count towards the completion of an award.

If you would like further details, please contact Mr N Leonard, Commanding Officer of the CCF (leonardn@solsch.org.uk), or Mr P Dean MBE, the SSI (deanp@solsch.org.uk) 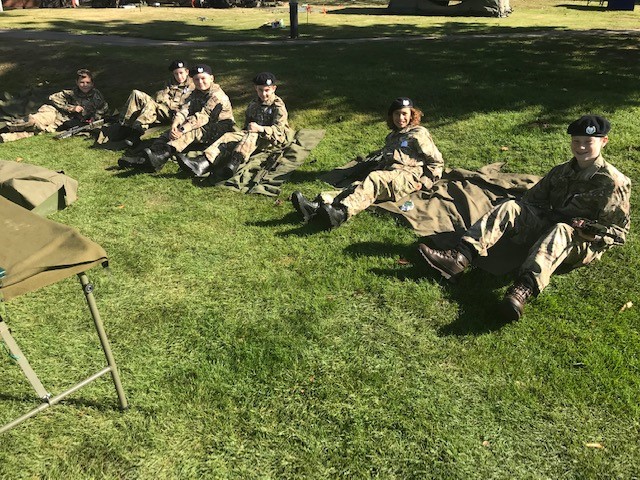 The Duke of Edinburgh Award Scheme offers great opportunities for pupils to extend the range of their experiences and to contribute to their community during their school career.

Participation in the scheme is highly regarded by universities as a sign of initiative and fostering team work. There are currently about 180 pupils engaged in the Duke of Edinburgh’s Award Scheme at one of the three levels, Bronze, Silver and Gold. Pupils normally join the scheme in the Fourth Form and complete the Bronze Award in that year, the Silver in the Fifth Form and the Gold in the Sixth Form. Pupils may also join the scheme on entry to the school in the Sixth Form.  Each level requires not only participation in an expedition, but also service and learning a skill.  The school provides both practice and real expeditions for pupils in the course of the term and in the holidays.  Often activities in the CCF or the School’s major expeditions form the basis for one element of the award.

Pupils are encouraged to join in the Fourth Form, but may do so at any time. Further details are available from Mr O  Bate, Head of Outdoor Education (bateo@solsch.org.uk) or Mr P Dean MBE.